Born and raised in Fairfield, IA, Ian grew up spending as much time as possible outdoors playing sports and exploring with his three brothers and the other neighborhood kids. If he was stuck inside you could find him in his room doodling and singing along to his favorite songs on the radio.

Ian immersed himself in sports, music, and art in high school with the hopes of being a rock star and professional artist. This dream took him to Luther College to play basketball and pursue vocal performance and a graphic design degree. He then transferred to the University of Iowa to finish out his Bachelor of Fine Arts in Graphic Design.

After graduating, in May of 2009 he moved just one month later to the great state of Colorado. He quickly immersed himself within the skate and snowboard culture and began practicing design within the industry. After owning his own clothing company for five years he decided his true passion was to create design for others instead of for himself. Ian’s primary focus has been on branding design and helping companies create brand identity systems that resonate with their audiences and truly represents who they are. Timeless design not only communicates, it evokes emotion from its viewer. 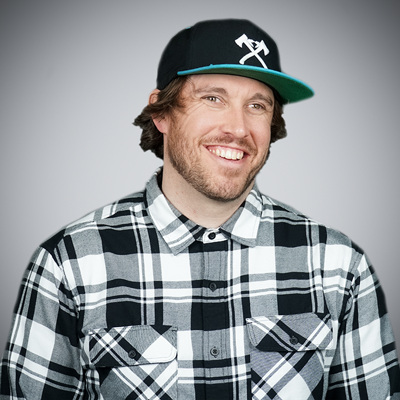 I play slow pitch softball, volleyball, and basketball every chance I get. If the sun is shining I want to be outside enjoying the weather and hanging with friends. You can also find me on the microphone singing karaoke anytime the opportunity presents itself.

What People Have Said About Working With Ian:

“ 'Design Wizard' is the phrase that comes to mind when I think about Ian. He is inspired and inventive in ways that you don't often see. He also happens to be one of the most wonderful humans I've had the pleasure of knowing - thoughtful, kind, and patient. Revenue River and its clients are tremendously lucky to have Ian working hard on brilliant design projects.” – Amanda Daume

“Ian brings a wealth of creative knowledge and positive energy to the team! He is well versed in the digital design realm with purposeful creations that aim to always solve for the client. We feel fortunate to have him here and look forward to collaborating with him on many projects to come.” – Jenna Weaver