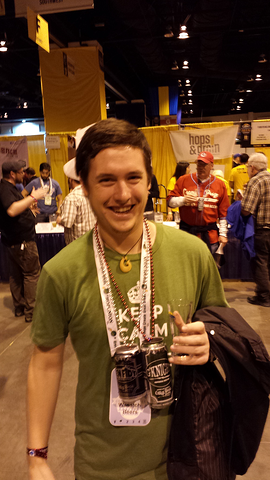 The Great American Beer Festival is in town and as one of the lucky few that secured a ticket to the beer lover’s paradise; it’s time for me to gush about all the sudsy goodness I found inside the doors of the Denver convention center.  Let me set the scene:

A cold, rainy night has done little to dampen the spirits of thousands of beer fans as they form a line stretching nearly the entire way around the conventions center, patiently waiting for the doors to open and allow them access to some of the nation’s newest and best craft brews.  A massive cheer can be heard from the crowd as the first person is filed through the door and given the freedom to sample any of the tens of thousands of beers brought in from around the country.  I wasn’t that first person, but I can only imagine his/her face looking like that of a kid’s when first entering Willy Wonka’s chocolate factory.  Booths cover the entire convention center floor, literally hundreds of different breweries are in attendance, all pushing their best and most flavorful brews, trying their hardest to create a memorable experience for each taster in an effort to grow their brand and reach.  Some areas bearing breweries' names were dedicated to other activities beyond beer consumption, with places like Oskar Blues’ silent disco attracting large crowds of fans who wanted to get down and boogey with headphones on (a brilliant move that could not have been done better by Denver marketing firms).  The scene was truly that of a Great, American beer festival.

Now that you know what I was presented with as I walked into and around the convention center, I’m sure that you don’t have to guess that I was like a kid in a candy shop!  First stop was to some of my favorite Colorado breweries in the mountains region on the floor.  From there, it was to some of the bigger names I was aware of around the entire country, and after that all that was left was to start searching for the most unique brews and brands from breweries I had never heard of.  This is where my marketing background started to kick in…

With so many unknown breweries lined up next to each other, it was extremely hard to choose one to taste from, with many decisions coming down to how their brand and booth looked compared to their neighbors.  When it came down to it, I started to compare brewers’ brands to their beers.  If their booth had more than the average poster with a list of available beers, I would then assume that their beer would be much the same; above average.  Now, of course this is not always the case.  Some of the more flashy brewers with strong branding efforts turned out to have bland beers while the nameless brewers right next door would have the most sublime Irish red.  Even knowing this, you still had to give it to the flashy brewers who obviously worked with Denver branding firms to create a unique logo and overall brand, because even though their beer wasn’t that good, they still got me to at least try it over the other guys!

That’s what branding is all about!  Creating a unique, interesting idea that personifies your business and everything it stands for.  Does your brand help you stand out in a crowd?  If you had to put together a booth for your brand and line up next to all of your competitors, would you be able to attract more customers than your neighbor?  Let the Great American Beer Festival be a lesson for you and your business; create a brand and image that helps you stand out in a crowd and you will do better to attract new and interested customers.  Cheers!