Alright business professionals out there.  Raise your hand if you said or heard  the following between Thanksgiving and New Year’s Eve:

A lot of people have said that.  Heck it might not even have been about business.  Maybe someone asked you to join a gym.  Or go on a date.

Most people have pushed something into the New Year, and this might be the week that you are tackling it.  After two years of letting things slip into the New Year, I decided in early fall to proactively prepare for the time between Thanksgiving and New Year’s.  The much dreaded “Eggnog and Candy Cane Season.”

What the heck is Eggnog and Candy Cane Season?  If defined with kid gloves, I would describe this as the time of year when employees, customers, vendors, you name it, might not be as fully engaged as they are throughout the rest of the year.  I have also had some other ways of describing it but this is a PG post.

The holidays give almost everyone out there a temporary crutch.  It seems everyone you talk to is “BUSY!!!!!” and that they: “HAVE TO GET READY FOR THE HOLIDAYS!!!!!”

In October of 2011, I began my position as National Sales Director for my employer.  As with any new position, I was very excited to get started.  My timing was impeccable, as not even one week in, I was on my way to the NACS (National Association of Convenience Stores) Show in Chicago.  For those of you not familiar with the show, imagine anything you can buy in a convenience store.  These companies all have massive booths and the floor is covered with category buyers for everything from cigarettes to energy drinks to good old fashioned PUGS Sunglasses.  It is the Final Four for those of us in this market sector.

NACS accounts for more than half of my annual leads and meetings.  This show for all intensive purposes is the kick off to the New Year.  It is at this show that you will be able to put a face to the name you have been trying to reach through email and phone.  You will also continue dialogue with those you met with during the previous year.  And you will also get to meet new people, whom like your product and want to discuss it further.

The Post-NACS travel becomes the first milestone of the new sales year.   Nearly every week from October 7th until Thanksgiving, I find myself on multiple trips to meet with everyone I talked with at NACS.  On the surface it would appear that I would be employing the “strike while the iron is hot” mentality.  And while this does play a large part, I also need to get out and visit with interested people before we get into the “Eggnog & Candy Cane” portion of the year.

After my first NACS in 2011, I hit the road running.  I met with people all across the land and came back very excited.  The conversations from NACS led to great in person meetings and many people asked that we move forward immediately.  I was very excited and started to debrief management, operations, and the field staff of customers we would begin partnering with.

And then a funny thing happened on the way to the dance.  Thanksgiving came and it was as if the world had come to a standstill.

Buyers I had talked with daily for 3 weeks, were unavailable.  And for good reason.  I found out the hard way about December being cooler resets and cigarette negotiation months.  Categories that are the life blood of the C-Store industry took top billing.

I have always tried hard to make sure I lean way closer to persistent rather than pestering, but found myself baffled as to why I could not reach anyone.  Unable to make any headway until the middle of December and so close to Christmas, I agreed with most buyers, that we talk about things in the New Year.  The clock had run out on 2011, it was time for all to celebrate the holiday season…Eggnog and Candy Canes for all. 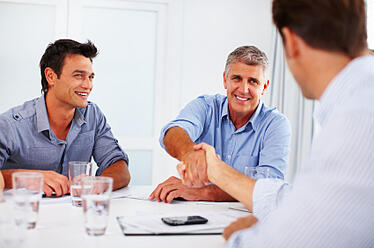 In 2013, after 2 years of not getting the post-NACS timing right, and succumbing to the holiday season, I made a point of not letting it happen again.  I was determined this year to enact some new Denver sales & marketing strategies to be able to work through the holidays with people I met with after the show.  The results have been great for both myself and the buyers.  I put together a game plan and wanted to share how I have been able to have more success two weeks out of Eggnog and Candy Cane land than ever before.

I believe that I now look at December as an opportunity rather than a dark sales month.  In addition to talking with people more than ever during the season, I will be able to put operations in a much better position than last year for the early season rush and I believe that our account management team will have a better chance at success.  Will you be enjoying your Eggnog and Candy Canes next season?

Previous
Richard Sherman, the Seattle Seahawks, and the Power of Branding
Next
5 Keys To Ruling A Blog Article In One Hour