As someone who has grown up most of their life with social media marketing in it, I’ve become used to the idea of companies trying to target me with their advertisements on Facebook.  It’s unfortunate, but it’s just the way of the world, even more so since good old Zuckerberg took the company public last year.  While I understand the anger and frustration of the many people out there who are outraged by companies taking up space on their personal newsfeeds, I also understand the obvious draw for those companies and Facebook to do such a thing. 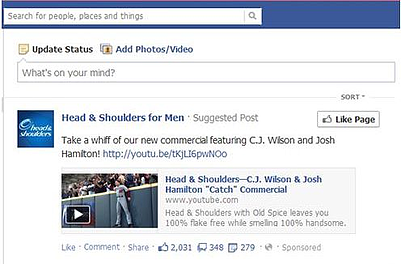 Recently, I’ve become aware of Facebook’s newest advertising ploy being tried out; the ‘Suggested Post’ placed in my newsfeed surrounded by my friends’ posts.  Unlike ‘Promoted Posts’ of the past that required a friend of yours to have liked the company’s page before targeting you, companies promoting these ‘Suggested Posts’ require no connections with you in order to take up space on your newsfeed.  So what does this mean for you as a casual Facebook user?  What about as a brand trying to expand your Denver social media marketing reach?  Luckily, I fit into both of these groups, so here’s my take on ‘Suggested Posts’ and what you should be doing about them depending on what you’re trying to get out of Facebook.

For you, Facebook is an escape.  It’s a place to kill time and see what your friends are up to while maybe catching up on what some of your favorite companies or interests are doing currently.  I completely get it.  So when you log onto your account and scroll through your newsfeed expecting to see updates from your friends but instead see a company’s advertisement disguised as a post prompting you to like their page, what do you do?  Well a mini temper tantrum is completely understandable in my book, but there are also some more productive actions you might take.

Action 1: Try and connect with the brand

Yes I know, how dare they invade my private time where I get to connect with my friends!  But take a step back and think; what do we sit through when we’re watching TV or listening to the radio (some other forms of relaxation for some of us)?

Companies have been utilizing the mediums that we use to escape from the world to market to us for years!  We’ve grown so accustomed to it that we rarely notice them anymore; whether it’s by unconsciously tuning commercials out when our favorite show goes for a break or by consciously choosing not to deal with them by purchasing new technologies like TiVo or satellite radio.  Either way, we need to realize that our world is changing, and with that so is the way companies must advertise to us.

So what does that mean to you?  Well first off, you need to realize that your favorite escape from the toils of everyday life is also a publicly traded company that’s sole purpose in life now is to create profit for its shareholders.  Unless you’re willing to start paying a subscription fee to use the site (highly doubtful), you better realize that it needs to find alternative revenue streams.  Second, your favorite site to kill time on just so happens to be one of the most visited websites on the internet today, so of course a company is going to try to target that market!  Knowing this, it’s time to start changing the way you see some of these advertisements, since they are helping to pay for your overall Facebook experience.

Action 2: Get Them Outa Here!

Now, I’m not defending every single ‘Suggested Post’ out there by any means, because there are some extremely ineffective and overall horrible ones taking up my newsfeed as we speak.  Instead, I’m asking you to be more patient with some of them and maybe see if this advertisement is something you might be interested in, and if not, just start to tune it out like you do with everything other type of advertisement you deal with on a daily basis.

For those of you who fear they don’t have the patience required to give these ‘Suggested Posts’ a chance, I completely understand and I’m here to help you in that regard as well.  If you’ve had enough with a ‘Suggested Post’ all you have to do is go the right hand corner of the post with the upside down arrow and click on it.  A drop down menu will appear with a few different prompts, choose the “Hide” button and Facebook will take it off of your newsfeed for good.  While this won’t stop all of the ‘Suggested Posts’ from popping up on your newsfeed, it will give the site a better idea of what you do and don’t like and hopefully help them further tailor better ads for you in the future.

BE CAREFUL!  If you read through the previous section before coming here, you should have gotten a pretty good sense of how the majority of Facebook users feel when it comes to advertisements in their newsfeed.  That being said, paying for a ‘Suggested Post’ can lead to increasing fans and brand awareness if done right.

Just like many other changes Facebook has made throughout the years, the ‘Suggested Post’ looks like it’s here to stay.  If you’re someone who has a short temper when it comes to being marketed to online, you can either start trying to change your perspective and realize why these companies are trying to grab your attention or take action by hiding their attempts.  And if you’re a brand trying to reach a larger audience, just remember the DO’s and DON’TS when it comes to paying money to get your message out to the masses.