Pretty much anyone who follows the NFL should have an idea what happened immediately following the Seattle Seahawks' victory over the San Francisco 49ers on Sunday night, but if you missed it, here's the rundown. On the 49ers' final drive to try and win the game, Seahawks cornerback Richard Sherman deflected a pass intended for the 49ers' Michael Crabtree, which was then intercepted, sealing the game, the NFC Championship, and a trip to the Super Bowl for Seattle. After the play, there was some trashtalk between Sherman and Crabtree, which resulted in a penalty on Sherman but ultimately had no bearing on the outcome of the game. Immediately following the game, Sherman was interviewed about that play and had some choice words for his opponent Crabtree.

Most postgame interviews are pretty civil these days, even for a violent, intense, league like the NFL. There's a lot of thanking of teammates and praising the opponents, and to see Sherman get aggressive and call out an opposing player by name is pretty rare. Obviously there was a great deal of backlash from viewers after the interview, and Sherman wrote a piece for Sports Illustrated this morning to address what happened. Sherman has been very vocal about his skills since entering the league, and while he has proven himself to be one of the greatest cornerbacks in the game and a pivotal member of the Seahawks secondary, casual NFL fans aren't learning about him because of his on-the-field play, but his bravado off of it.

Meanwhile, the Seahawks are headed to the Super Bowl to play the Denver Broncos, and you can pick almost any one of their players and find a unique and compelling story about how this team has come together, including head coach Pete Carroll. The Seahawks have been rejuvenated in the past few years, fielding the best defense in the league and taking chances on underrated players like Marshawn Lynch and Russell Wilson on offense. Their stadium is designed to be the loudest outdoor arena in the league and their fans, known as the 12th Man (nomenclature Seattle pays Texas A&M for the use of), are some of the most loyal and passionate around.

Branding is best known as a marketing term for all the designs, culture, emotions, etc. that surround a company or product. But branding isn't limited to just big corporations. Small businesses need branding to help differentiate themselves from the competition, and everyone uses social media to help build and promote their personal brand. The Seahawks have branded their fans as the 12th Man, and their cornerbacks and safeties have been branded the "Legion of Boom." While branding is a daily necessity in marketing and advertising, in sports you're more likely to think of players and games rather than the brand surrounding the team. The Dallas Cowboys being called "America's Team" is a perfect example of branding that has stuck around (far too long). Branding can be intentional, it can be accidental, and it can be permanent. The Seahawks are known for their passionate fans, amazing homefield advantage, and exceptional outreach through social media, namely reaching out to Starcraft 2 pro Geoff "iNcontrol" Robinson. But now Sherman is becoming known for a passionate interview immediately following the biggest game of his career, and earning a "villain" label right before the Super Bowl, an excellent example of unintentional branding that might stick with Sherman for a long time.

When I consider the great corporate branding successes in marketing, there are three that immediately come to mind. Odds are you've seen these before, and are well aware of their impact for their companies and advertising in general, but I thought of them immediately when considering sports branding and the labels that are immediately applied (for better or worse) after events like Sherman's interview. 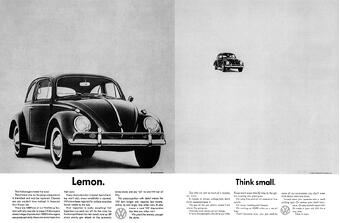 There's nothing that I can say about this ad campaign that hasn't been said before by better writers than I, but it's truly remarkable how equally different and effective this campaign was for Volkswagen and their agency DDB.This honest and straight-foward campaign with classics like "Think Small" and "Lemon" helped create a strong brand identity for VW in the United States, and gave their image the angle they needed to compete against bigger, flashier automotive companies.

I've shared before how fanatic I am about Steve Jobs and Apple products, but fortunately, the praise for this commercial comes from more than just me. Branding Apple as the single obstacle in the path of IBM's quest for total personal computer dominance, the "1984" ad has repeatedly been named the greatest commercial ever, and the perfect embodiment of Jobs' rebel spirit in the face of mega-corporate opposition. It's safe to say that we wouldn't have iMacs, iPods, iPhones, or iPads without this ad, and Apple wouldn't have captured the intense personal loyalty of millions of consumers. Much like VW, creating an emotional connection with consumers rather than focusing on the product itself proved to be an enormous branding victory for Apple.

3. Old Spice "The Man Your Man Could Smell Like"


Aside from being really, consistently, funny, the Old Spice ads in the past 4 years have completely redefined the brand. Marketing has made what was once a deodorant for grandpas suddenly cool and sexy for a younger generation, without being juvenile like similar bodywashes like Axe. We've seen dozens of brands try to replicate the same non sequitur style employed by Wieden+Kennedy for Old Spice, with mostly poor results. Of course, the products themselves had to live up to the hype created by the ads, but it's one of the most striking branding evolutions in the 21st century, and it's why I'm wearing Old Spice right now.

Don't underestimate how important your branding efforts are to every aspect of your business. You may think that you're wasting time figuring out your target audience and how to present your company if you're a small business, but perception and presentation plays just about as large a role in your success as your actual products and services. A Denver branding agency like ours does this every day and we've seen how branding can make or break your image. The Seahawks have a strong brand image and are deeply connected with their fan base, and we'll have to see how Richard Sherman's personal brand evolves after his actions on Sunday. Personally, I don't have an issue with an emotional response immediately following a huge play in a huge game, but there are many people who disapprove of Sherman's actions. If Sherman truly wants to brand himself as the best cornerback in the game, he'll have a great chance to prove himself in the Super Bowl, against the best offense in the league and one of the greatest quarterbacks of all time. Should be a lot of fun to watch.

Update: Had a chance to discuss this article, Richard Sherman's brand image and his potential on 97.3 KIRO in Seattle today. Grateful for the opportunity to discuss this developing story and what it means for Sherman and Seahawks. Check out the audio!