Learn how RedGuard reinvented itself with inbound and HubSpot while outpacing a competitor.

Put simply, RedGuard ensures that people can get home alive and safe at the end of the day.

Inbound Adoption in an Established Industry

RedGuard's mission inspires Mike Kastens, Brand Manager, to act as a thoughtful steward of the brand, taking a long-term view of sales and marketing success.

After year one of his current seven-year tenure at RedGuard, Kastens observed that the industry's prevalent yet outdated marketing and sales tactics wouldn't position them for continual growth in a shifting competitive market.

Kastens had heard about inbound, and the underlying principles resonated with him. He reflected on how he makes his own purchases and the idea that customers would perform their own research and look for educational resources aligned with his experience.

As Kastens says, "if a company answers my questions well, they'll be a top candidate for my business."

He obtained a demo HubSpot account to investigate the marketing automation features but quickly involved then Director of Sales & Marketing, Tim Taton to evaluate what Sales Pro was doing much more intuitively than their existing CRM, Sage.

A Critical Juncture with Competitor Misinformation

While Kastens advocated for inbound at RedGuard, a competitor came on the scene with inaccurate claims, igniting Kastens to move quickly to combat it.

He knew that he would need support to build out RedGuard's inbound foundations while also creating a targeted growth campaign to oppose the competitor's misinformation. To ensure success, he looked to hire an Elite-tier HubSpot partner with a proven track record and intimate knowledge of HubSpot who could serve as a collaborator, co-strategist, and executor alongside him.

He chose Revenue River as the agency to tackle the following goals and challenges:

Short-Term Gains with a Long-Term View

Our solution was to take a phased approach to strategy, systems build, and campaign launch, targeting long-term growth with inbound while making short-term gains and impact with a campaign.

In the first 30 days of our engagement, we identified goals and KPIs, performed a sales and marketing system audit, identified personas and the customer journey, honed brand messaging, and built a campaign strategy to address the competitor's misinformation.

The strategy informed the systems built during the next 30 days. We implemented a complete data capture and collection system, including smart lists, custom properties, data segmentation, and nurturing workflows based on our updated personas and customer journey definitions.

We also configured campaign tracking to ensure efforts were tracked and reported to provide insights that feed optimization and future execution.

We immediately optimized for conversions by implementing HubSpot conversations and creating new conversion paths on the website, including updated landing pages, smart forms, and CTAs, with automated lead routing to the Sales team.

With the HubSpot system on solid footing, we built a campaign that would position RedGuard as the ideal solution to their prospects' challenges by ranking for target keywords and promoting the use of steel in blast-resistant buildings as opposed to concrete. In order to create an impactful campaign, we knew we had to create content that would engage our audience, driving them through the revamped marketing and sales system on HubSpot while gaining traction on search engines.

We created a topic cluster strategy to rank quickly and gain authority on materials for blast-resistant buildings. This strategy allowed us to rank for terms that our audience is searching for, while also providing a platform to stand against their competitor's claims.

Through a multi-pronged, approach, we were able to attract, engage, and convert our target personas.

Once the inbound foundations and campaign were in place, alignment between the Marketing Enterprise Hub and Sales Hub became essential so that sales reps could respond effectively and efficiently to newly generated inbound leads.

We worked with both teams to clearly define lifecycle stages. We also evaluated which meaningful actions along the customer journey would indicate a lead's sales-readiness and built a lead scoring system, with the goal of better identifying leads that otherwise may fall off the radar.

Through lifecycle stage definition, we are able to better understand and manage a prospect’s intent, understand their buying behavior, and provide sales with prospects that are more likely to lead to closed-won opportunities.

In tandem with showing what goes into the lead scoring process, we trained the Sales team to review each contact’s timeline in HubSpot to personalize sales outreach based on activities such as ad clicks, marketing email engagement, CTA, and form submissions, and page viewing history.

We trained 19 members of the sales team tailored to RedGuard's needs.

By tackling inbound foundations, a targeted growth campaign, and sales and marketing alignment on an aggressive timeline, we were able to see increases in results across the flywheel. Year over year, we saw a 120% increase in relevant traffic, a 61% increase in MQLs, and a 329% increase in conversion rates.

The biggest and most significant result of all was the shift from outdated tactics like print ads to a modern, inbound approach. With both Sales & Marketing Hubs in place, RedGuard is able to attribute revenue back to inbound efforts. Currently, inbound accounts for 22% of the company's tracked revenue in HubSpot. 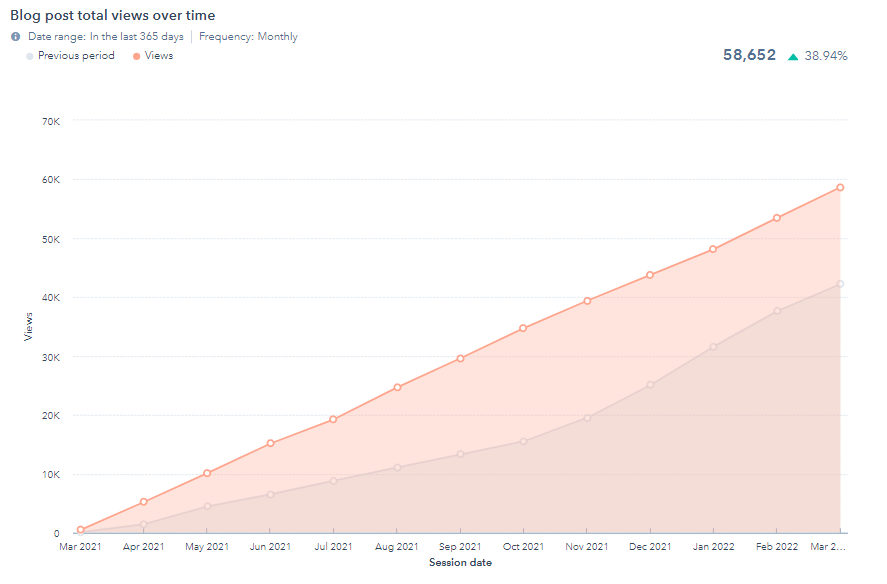 Kastens describes the impact as: "A reinvention of the company, self, and team as to who and how we were as marketers."

He now has a robust CRM with greater alignment, visibility, and brand awareness.

Before, it was difficult to establish ROI and generate lead data. Now, Kastens has granular data that can be shared organization-wide to demonstrate success or identify areas for future optimization. Marketing is an everyday part of discussion, and the keeper of the business' rapidly growing online presence.

Kastens says we're still just scratching the surface. He expects the % of attributable revenue to inbound and HubSpot to grow as the industry evolves. His next area to tackle with Revenue River is creating and refining a superior customer experience in alignment with the concept of the customer-centric flywheel. Kastens plans to continue to dive into tactics that keep RedGuard in front of their audience and out in front of competitors.

Not a lot of people in the country need our product, but thanks to our inbound efforts, the ones that do, are spending more time with us, reading our content, and engaging with it. I appreciate that Revenue River stays up to date on their craft and everybody we talk to brings ideas that we didn't think of. What we've done together so far is the reason we're now into year number two!”

Put our team to work helping you reach your goals for digital today!
Make Your Own Story
❌